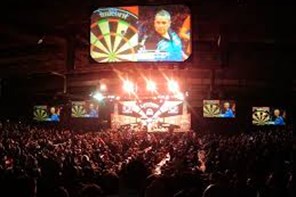 The world’s best darts players will return to Arena

No Under 18s permitted

The world’s best darts players will return to Arena Birmingham when it hosts the 2020 Unibet Premier League.

The ten-player tournament, featuring the likes of Michael van Gerwen, Rob Cross and Peter Wright, will see the sport’s biggest names battle for the prestigious title. Thursday 30 April is the 14th league night of the season when the battle for Play-Off spots continues and the remaining eight players, following Judgement Night, step up their bid to claim top four places.

"The 2019 Unibet Premier League proved hugely successful and the confirmation of the schedule for 2020 is an exciting moment for us," said PDC Chairman Barry Hearn. “This will be four months of top-class action, featuring the biggest names in darts, and it’s a night not to be missed!”