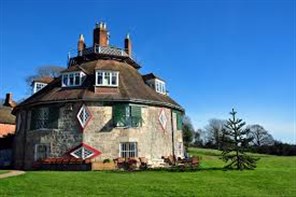 This property is owned by the National Trust

This unique sixteen-sided house was described by Lucinda Lambton as having 'a magical strangeness that one might dream of only as a child'.

It was built for two spinster cousins, Jane and Mary Parminter, on their return from a grand tour of Europe in the late 18th century. It contains many objects and mementoes of their travels.

The extraordinary interior decoration includes a feather frieze, gathered from native game birds and chickens, laboriously stuck down with isinglass.

There is also a fragile shell-encrusted gallery, said to contain nearly 25,000 shells, which can be viewed in its entirety using a touch screen 360 degree virtual tour.