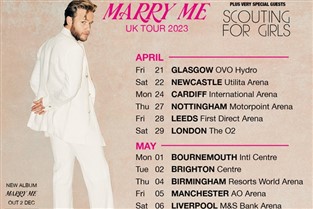 Return Coach only service to Olly Murs - Marry Me concert 2023

supported by Scouting For Girls

Olly Murs is back with new music and a new Arena Tour in 2023! Murs has been off the radar for over four years. For a musician who had four Number One singles and four Number One albums in a near-back-to-back run after bursting onto the scene with his double-platinum self-titled debut in 2010, that’s a big gap! Last time round he sold 180,000 tickets for UK arenas in 2019. He’s determined to go bigger, better and louder this time.

Since bursting onto the music scene as the runner-up on the 2009 series of The X Factor, pop singer and songwriter Olly Murs has achieved an incredible amount of success.

Not long after the competition, Murs embarked on a sold-out X Factor arena tour and his debut single Please Don't Let Me Go shot straight to the top of the charts in September 2010. His second hit, Thinking Of Me, peaked at No.4 in November of the same year. His self-titled debut record followed soon after, landing at No.2 on the UK albums chart.

Murs then decided to take his music in a different direction with his 2011 single Heart Skips A Beat, featuring Brighton hip hop duo Rizzle Kicks. It went right to the No.1 spot on the UK singles chart, and his follow-up album, In Case You Didn’t Know,  did the same that autumn. Ollie Murs' next tour was the star's first headlining UK arenas.

Alongside his music career, in 2012 Murs released his illustrated autobiography Happy Days. In it, he opened up about challenges with depression and anxiety that came with his sudden rise to fame. Since then, he’s worked closely with mental health charities like Brainwave and #IAMWHOLE, which presented the ground-breaking Music 4 Mental Health concert in 2018.

In 2018, Murs got his own spinning red chair when he joined the coaching panel of The Voice UK. The following year, Team Olly member Molly Hocking was crowned the champion of the TV competition’s eighth series. Murs spent the summer of 2019 touring the UK with a huge run of shows celebrating 10 years in the music industry, as well as promoting the release of his sixth studio album, 2018’s You Know I Know. The double album featured a selection of Murs’ greatest hits, as well as 14 new songs.

In summer 2021, Murs embarked on a huge UK tour performing his biggest hits – including tracks from his triple platinum album Never Been Better –  that continues through summer 2022. On 20 September 2021, he was revealed as the first headliner for Trentham Live, appearing on 4 September 2022. In August 2022 Olly Murs signed with EMI for his first studio album in four years, Marry Me, with a release date 2 December. 'Die Of A Broken Heart' is its lead single.

The coach will park and drop you off close to the venue from where you can walk to the Arena and will able to find the coach after the concert.