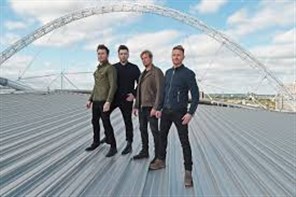 Return coach only service ideal for those with tickets to see Westlife in concert at Wembley Stadium 2021.

All customers will AUTOMATICALLY be TRANSFERRED to this re-arranged date and receive revised paperwork by post.

The office is currently closed so please do not telephone until we re-open. When the office re-opens, we will be able to discuss with you in due course re-imbursement for those not wishing to attend the 2021 show or to transfer your booking to something else of your choice. Thank you for your understanding and patience at this difficult time.

Return Coach travel only service ideal for those with tickets to see WESTLIFE in concert at Wembley Stadium.

The UK's top selling album group of the 21st century, Westlife, today announce that they will be performing their first-ever Wembley Stadium connected by EE show next August. It follows the stunning success of this summer’s ‘Twenty Tour’ which sold a record 600,000 tickets across 27 cities and 13 countries.

The spectacular concert, on Saturday 22 August 2020, will see the global pop kings perform their greatest hits including 'Swear It Again', ‘Flying Without Wings’ and ‘You Raise Me Up’ as well as sensational uptempo new songs from their forthcoming album ‘Spectrum’ such as ‘Hello My Love’, ‘Better Man’ and ‘Dynamite’.

The band will be supported by James Morrison and All Saints.

It will be the first time, in the band’s 20-year career, that Westlife have headlined Wembley Stadium and follows the phenomenal success of their comeback which has seen the nation fall in love with the Irish superstars all over again. Westlife fever captured the UK this summer with the release of hit new music and their fastest-selling tour of all time.

“Headlining Wembley Stadium is a dream come true for all of us. This is a once-in-a-lifetime experience and we’re incredibly excited for a show which will be different and more spectacular than anything we’ve ever done before. This will be our biggest ever concert in the UK”, say the band.