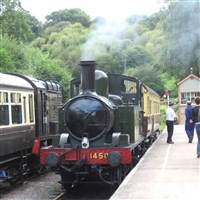 Time enroute to explore Chepstow then on to the Forest of Dean Railway. During your return trip you will be served a 2-course lunch.

Time enroute in to explore Chepstow. Chepstow, which means marketplace in Old English, offers relaxed, niche shopping in arty surroundings. Lined with handsome Georgian and Victorian buildings, the heart of town was made even more appealing in the mid-2000s. An award-winning scheme added pedestrian areas and intriguing stone walls and sculptures, inspired by local lore.

The Normans knew a spot worth defending when they saw one. Their castle on the River Wye, two miles from its mouth, was a massive show of strength and is probably the first medieval stone built castle in Britain. Chepstow’s Great Tower Keep was commissioned by William the Conqueror barely a year after the Battle of Hastings, making this Britain’s oldest surviving post-Roman stone castle.

Then on to the Forest of Dean Railway. With 4.5 miles of line running through beautiful woodland and countryside offering visitors a chance to experience the relaxing pace of a typical country branch line.

Your evening starts at Norchard Station at 18:00, where you will be introduced to the mystery, before travelling in style on board our steam train, with a two-course meal, consisting of a main course and a dessert (options will be available closer to the day), served on board while you crack the case! Drinks will also need to be pre-ordered which will be set up ready at your table before boarding.

It’s the 1920s and, after terrorising the streets of Birmingham for decades, notorious racketeering gang The Speaky Minders have been chased out by the Birmingham Boys and are seeking new territory in the countryside. Lydney is an ideal base, close to the rich pickings of the world famous Cheltenham Racecourse, but when one of the Speaky boys is discovered dead at their new headquarters at Lydney Station the Speaky’s plot revenge – starting a new gang war with fast rising Gloucestershire gang the Lydney Lads and Lasses.

Join Ceridwen Theatre Company for an evening of Murder most foul. Gang colours are Speakys – Red and Lydneys – Blue so choose your gang and dress accordingly!

The evening will conclude at approximately 21:00.