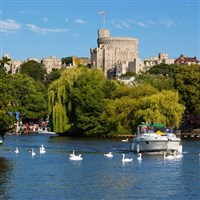 Enjoy a visit to either Hampton Court or Kew Gardens

Hampton Court or Kew Overnight with free time in Windsor


Day 1 - Choose between a visit to Hampton Court or Kew Gardens:

Hampton Court has grown from humble beginnings in the 11th century to one of the finest palaces in the world. Over 800 years of history can be explored through this magnificent palace whose previous owners include Cardinal Wolsey, Henry VIII and Elizabeth I.

Visitors are offered an introductory exhibition, a guide through Tudor kitchens, a costume guide tour, and the opportunity to see the Queen's state apartments, the King's apartments and the Wolsey and Georgian rooms. One of the most impressive sights is the Great Hall, Englands last and greatest medievel hall, decorated with sumptuous tapestries. Outside you can try not to get lost in the worlds most famous maze or visit the Privy garden restored to its 1702 glory.

Kew Botanic Gardens are located in 300 acres of beautiful landscape Kew Gardens sits beside the river Thames between Richmond and Kew in south-west London. The Gardens are a World Heritage Site with six magnificent glasshouses, and are home to a remarkable collection of plants from all over the world including over 14,000 trees. Kew Gardens is a wonderful day out for all. If you haven't been to Kew before, don't miss the 19th-century Palm House, the tropical atmosphere of the Princess of Wales Conservatory, a walk to the iconic pagoda, and a climb up for a birds-eye view at the new Xstrata Treetop Walkway.

Beautiful as the 17th century Dutch-gabled country house along the River Thames is, it could hardly be called palatial, particularly by royal standards, and yet it is one of London's most notable historic royal palaces. No small feat considering Kew Palace, which is set within the grounds of the Royal Botanic Gardens in Kew. Kew Palace earned its place in history by being exactly the opposite - retiring, modest and comfortable. In other words, it was the perfect royal retreat. Most famously, it served as just that for the prodigious family of King George III. First opened to the public by Queen Victoria in 1899, the palace was closed from 1996 to 2006 while undergoing £6.6 million of careful restoration and conservation. The money and effort have transformed Kew Palace from "a gaudy 1960s interpretation of the Georgian era" into a historically accurate study of the daily life and everyday domesticities of the palace and the royals who lived within it.

Free day to explore and shop in this historic town - a beautiful, unique and historic destination, The Royal Borough offers a huge range of activities for children, teenagers and adults. From exploring the castle to leisurely boating on the River Thames to romantic horse-drawn carriage rides through Windsor Great Park, there is a large array of relaxing activities on offer.

Plus great shopping and dining and perfect places to relax and unwind, then look no further than the Royal Borough of Windsor and Maidenhead! Relax and be inspired by the seasonal interest in the beautiful gardens and along the riverbanks.

Crowned by stunning Windsor Castle- the largest and oldest inhabited castle in the world and the Queen's favourite weekend home - and linked by the beautiful River Thames, the Royal Borough has a rich mix of history, culture, heritage and fun making it one of South East England’s loveliest short break destinations and a 'must see' for everyone's list.