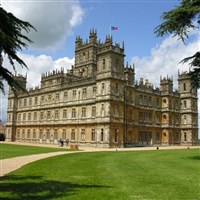 Highclere Castle is one of England's most beautiful Victorian Castles set amidst 1,000 acres of spectacular parkland and was the backdrop for Downton Abbey.

Your entry tickets includes the house, gardens and Egyptian exhibition.

PLEASE NOTE as of 14/3/22: just one ticket remaining. SOLD OUT. call to go on waiting list in case of cancellations.

Highclere Castle is one of England's most beautiful Victorian Castles set amidst 1,000 acres of spectacular parkland. The Carnarvon family has lived at Highclere since 1679, and the current Castle stands on the site of an earlier house, which in turn was built on the foundations of the medieval palace owned by the Bishops of Winchester for some 800 years.

Longstanding friend of the Carnarvon family, Julian Fellowes had Highclere Castle in mind as he wrote the drama Downton Abbey. It was filmed on location here at Highclere Castle. He often commented he wanted a house which spectacularly testified to the confidence and soaring optimism of the Edwardian period. The success of Downton Abbey took everyone by surprise from the first nervous apprehension whether anyone would like the first episode or stay with it for the second or third… the series has become a phenomenon with appreciative viewers all around the world.

The Saloon is physically and socially the heart of the house. It was designed for the 4th Earl by Thomas Allom in a gothic style with rich decoration and completed in the 1860's. The remarkable wall coverings are made of leather and were hung here in 1862. The Dining Room is dominated by Van Dyck's great equestrian portrait of Charles I. Either side are portraits of Carnarvon ancestors who took part in the civil war in England in the 1640’s. The Double Library was in its heyday during the late Victorian period housing over 5,650 books, the earliest dating from the 16th century. It is used a great deal by the family today to gather in before and after lunch or dinner. Plus the Music Room, the Drawing Room, the Smoking Room.

There are 11 bedrooms on the first floor, some of which can be seen by visitors. The opulent Stanhope bedroom is decorated in rich red, recalling its decoration for the visit of the Prince of Wales in December 1895. The Arundel bedroom and its dressing room were used as an Operating Theatre and Recovery Room respectively during the First World War. Mercia bedroom is noted for the charming four-poster bed decorated with 18th century silks and matching furniture. Quite a few of the bedrooms are used for the filming of Downton Abbey.

The shutters opened and the servant’s bell rang once again as the Downton Abbey cast and crew returned to Highclere Castle to film the highly anticipated feature length motion picture everyone had been waiting for that premiered in September 2019.

The stone staircase leading from the Saloon, winds up and down to what were the old staff dining rooms, the cellars, sitting rooms, utility areas and kitchens. The “Downton" set team partly recreated the lower flight of these stairs at Ealing Studios where the staff rooms are filmed.