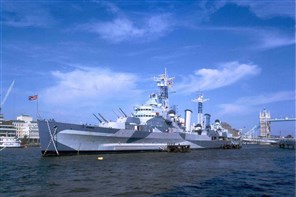 Explore HMS Belfast’s nine decks to discover the stories of life on board this warship during Arctic convoys, D-Day and beyond.

Explore HMS Belfast’s nine decks to discover the stories of life on board this warship during Arctic convoys, D-Day and beyond. Imagine sleeping in one of the tightly packed hammocks during duties in Arctic waters, or being stationed deep in the bowels of the ship when she opened fire in support of Allied troops on D-Day. Venture into the interactive Operations Room, and immerse yourself in the midst of a battle in our Gun Turret Experience.

After the Second World War HMS Belfast played an active role in the Korean War from 1950-1952 working with other Allied Forces to support the retreating American and South Korean troops. Her final years were spent performing peace-keeping duties until she was retired from service in 1963.

As early as 1967 the Imperial War Museum had been investigating the possibility of preserving a Second World War cruiser. This led to the formation of a trust, headed up by one of HMS Belfast’s former captains Rear-Admiral Sir Morgan Morgan-Giles. After some years the trust was successful and HMS Belfast was brought to London opening to the public on Trafalgar Day, 21 October 1971. Today she is the last remaining vessel of her type – one of the largest and most powerful light cruisers ever built.