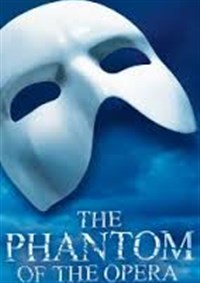 A mysterious masked man falls in love with Christine, a singer who inspires The Music of the Night.

Phantom of the Opera

Performance at Her Majesty's Theatre, London

Lloyd Webber's romantic musical is based on Gaston Leroux's gothic novel of life beneath the stage of the Paris Opera House. A mysterious masked man falls in love with Christine, a singer who inspires The Music of the Night. Directed by Harold Prince.

Seen by over 140 million people around the world, The Phantom of the Opera  has broken the barriers of theatre to become one of the greatest cultural references ever. Enticing audiences into Her Majesty’s Theatre since 1986, it’s a show with lavish costumes, rich operatic voices and gorgeous scenery including a boat ride that takes place on stage! In the show, you’ll be able to find out what lurks beneath the Phantom’s white mask. So, if you want to hear an iconic soundtrack as well as be a part of West End history, then you’ll want to book your tickets to The Phantom of the Opera.

Once you’ve taken your seats at Her Majesty’s Theatre, it’s likely you’ll be entranced by the majestic surroundings. As the curtain rises, you’ll see the infamous replica of the Paris Opera House chandelier that weighs 1 ton! You’ll be introduced to the legend of the Phantom of the Opera by the auctioneer, as you meet the Phantom who is becoming fond of new chorus performer Christine Daaé.

When the Phantom throws Christine into an underground lair to keep her for himself, you’ll begin to realise that the Phantom is a frenetic character. When the Phantom demands Christine stay with him instead of going with her childhood friend Raoul, arguments fly around the Paris Opera House and the price of stardom is heavy.

Having left a lasting impression on theatregoers, it’s common for people to visit The Phantom of the Opera  time and time again. Make sure that you’re a part of this sensational show as soon as you can and book your tickets to this West End spectacle.

Generally the performance times for London matinee Shows are either 14.30 or 15.00. Evening performance: 19.30. We drop directly to the Theatre and pickup at roughly the same point after the show is finished.

Generally our tickets for London shows are in rows in either the mid-Stalls or front to mid-Dress Circle. Each departure date will vary.

Phantom Of The Opera