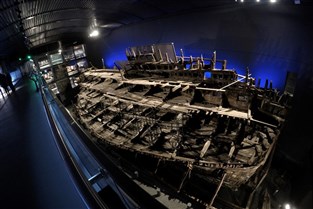 Situated within a working Naval Base, Portsmouth Historic Dockyard is home to a collection of fantastic attractions, historic ships and museums. It is the only place in the world to see the Royal Navy past, present and future.

with Three Attraction Ticket for entry to ant three of the attractions onsite (including The Mary Rose, HMS Warrior and HMS Victory).

This Three Attraction ticket gives you access to all the attractions at Portsmouth Historic Dockyard.

HMS Victory is the Royal Navy's most famous warship. Best known for her role in the Battle of Trafalgar, the Victory currently has a dual role as the Flagship of the First Sea Lord and as a living museum to the Georgian Navy. The visitor experience onboard HMS Victory at Portsmouth Historic Dockyard as Nelson’s famous flagship from the Battle of Trafalgar is now brought alive with a hand-held audio guide for the first time in the ship’s history.

There have been many celebrated warships in Britain’s naval history but HMS Victory can justifiably claim to be the most famous of them all. Having served as Vice-Admiral Lord Nelson’s flagship at the Battle of Trafalgar, she has become one of the UK’s most-loved visitor attractions.

The Mary Rose is the only 16th century warship on display anywhere in the world. The purpose-built award-winning museum reunites her with many of her artefacts and crew, capturing the moment in time when she sank. Step back in time and explore Henry VIII’s favourite warship – raised from the depths of the Solent and painstakingly conserved for future generations. The story of the Mary Rose is one of the most fascinating in naval history. A tale of battles fought against the French for over 30 years before sinking off the coast of Portsmouth in 1545. It’s an account of her being raised from the seabed more than 470 years later and of her meticulous conservation.

A complimentary waterbus takes visitors across the harbour from Portsmouth Historic Dockyard.