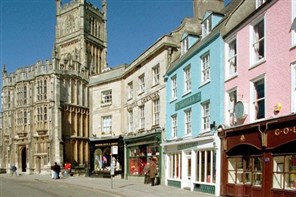 Cirencester is often referred to as the Capital of the Cotswolds and was the second largest town in Britain during Roman times whilst Tetbury is known as an 'architectural gem' as many of the wool merchants houses still look as they did 300 years ago.

The town of Tetbury is in the Gloucestershire Cotswolds and is proud of its 1300 years of recorded history since 681 when Tetta's Monastery was mentioned in a charter by King Ethelred of Mercia. In the Middle Ages, Tetbury was an important market town for the Cotswolds wool trade and the town centre is still dominated by the splendid pillared Market House built in 1655. The town is known as an 'architectural gem' as many of the wool merchants houses still look as they did 300 years ago.

Tetbury is well known for its 25 antique shops and its close proximity to Prince Charles's residence of Highgrove.

The town has a wonderful variety of shops including many specialist shops offering a wide choice. Many of the shops are individually owned where you will receive personal attention of the owner and experience a level of service long since vanished from many high streets. Several of Tetbury's retailers have received national awards for excellence and the visitor will notice that many of the towns businesses bear the Prince of Wales feathers as a sign that they hold the Royal Warrant.

The market town of Tetbury has a wide choice of tea shops, bistros, cafes, pubs and restaurants which offer a good choice of food and drink.

Cirencester is often referred to as the Capital of the Cotswolds and was the second largest town in Britain during Roman times.

Today the former Corinium Dobunnorum is home to more than 18,000 people and a service centre for the thousands more who live in surrounding villages. In later years it was a very prosperous medieval wool town. Cirencester's market square is dominated by the cathedral-like Parish Church of St. John Baptist (one of the largest in England). The large south porch with its impressive fan vaulting was built about 1490.

The town contains many interesting buildings spanning several centuries. Cirencester's market town status was mentioned in the Doomsday Book of 1086. Traders still set up their stalls every Monday and Friday and since 1999 the town has had its own farmers' market. Crafts and antiques markets are also regular attractions.

The first Agricultural College in the English speaking world was founded by Henry 4th Earl Bathurst who became founding president of the Royal College of Agriculture in Cirencester. The college was established to train young farmers in the best agricultural methods of the time and to lead the way with innovations.