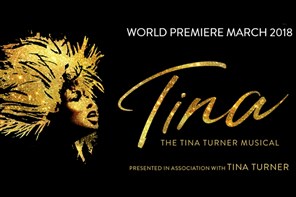 Featuring her much loved songs, TINA - The Tina Turner Musical is written by Olivier Award-winning playwright Katori Hall and directed by the internationally acclaimed Phyllida Lloyd.

From humble beginnings in Nutbush, Tennessee, to her transformation into the global Queen of Rock ‘n’ Roll, Tina Turner didn’t just break the rules, she rewrote them. This new stage musical reveals the untold story of a woman who dared to defy the bounds of her age, gender and race. It opens on Tuesday 17th April 2018.

One of the world’s best-selling artists of all time, Tina Turner has won 11 Grammy Awards and her live shows have been seen by millions, with more concert tickets sold than any other solo performer in music history.

Featuring her much loved songs, TINA – The Tina Turner Musical is written by Olivier Award-winning playwright Katori Hall and directed by the internationally acclaimed Phyllida Lloyd.

During her career Tina Turner has released various solo albums, beginning with 1974’s Tina Turns The Country On! and progressing through to the likes of Acid Queen in 1975, Private Dancer in 1984, Foreign Affair in 1989, What’s Love Got To Do With It in 1993 and Twenty Four Seven in 1999. Along the way she has also made appearances in film and television shows, from Mad Max: Beyond Thunderdome to Last Action Hero and others.

So to say that Tina Turner has had a profound effect on popular culture would be an understatement and this new musical is a testament to her lasting appeal.

Presented in association with Tina Turner.

"It's really important to me to have the chance to share my full story. I am so happy that London, a city that means so much to me, is going to be where we stage the World Premiere of my new musical!"

We drop directly to the Theatre and pickup at roughly the same point after the show is finished.