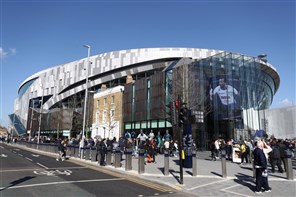 Discovering the state-of-the-art features and cutting-edge architecture and design of the stadium, 90-minute tour including behind the scenes, plus visit museum and club archive.

We are delighted to confirm that Guided Stadium Tours of their new home will begin on Monday 15 July 2019.

INCLUDED IN YOUR TOUR

The Spurs stadium tours allow you to step behind the scenes at the Tottenham Hotspur Stadium during a fully guided 90-minute experience. Walk in the footsteps of the Tottenham Hotspur team, getting exclusive access to player areas, as well as discovering the state-of-the-art features and cutting-edge architecture and design of the stadium.

You can learn how creating an unrivalled fan experience was at the centre of plans and how we are the only stadium outside of the US designed for both football and the NFL. Our Spurs stadium tours also give you an insight into how the players prepare on matchdays. Walk out of the changing rooms, down the tunnel and even sit on the Spurs bench. Our tour guides will share insights, tell anecdotes and bring the stadium to life, enabling you to get up close to our fantastic new home.

Also visit the Tottenham Hotspur Museum and Club Archive which tells the story of the club being founded in the heart of Tottenham to becoming one of Europe's powerhouses. The Spurs Museum is home to never seen before club artefacts and you'll be able to uncover moments from our past, test your knowledge and share experiences in our interactive fan wall.