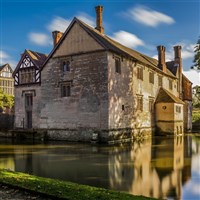 Baddesley Clinton (pictured) was the home of the Ferrers family for 500 years and Packwood House is a much-restored Tudor house, park and garden with notable topiary.

Baddesley Clinton was the home of the Ferrers family for 500 years.

Much of the house you see today was built by Henry Ferrers, a lawyer, diarist and antiquarian, in the late 1500s.

The house was a sanctuary not only for the Ferrers family, but also for persecuted Catholics who were hidden from priest hunters in its secret hiding places during the 1590s.

Packwood House is a much-restored Tudor house, park and garden with notable topiary.

The culmination of a lifetime of dreams: salvaged objects and exotic pieces come together in a Jacobean meets Edwardian style. Beautiful, homely, warm and welcoming. We can't put it better than a visitor in the 1920s did: A house to dream of, a garden to dream in.

The house was originally built in the 16th century, yet its interiors were extensively restored between the First and Second World Wars by Graham Baron Ash to create a fascinating 20th-century evocation of domestic Tudor architecture.

Packwood House contains a fine collection of 16th-century textiles and furniture, and the gardens have renowned herbaceous borders and a famous collection of yews.

Visit is to both properties. National Trust Members - coach only.