Barnstaple and Bideford for the day 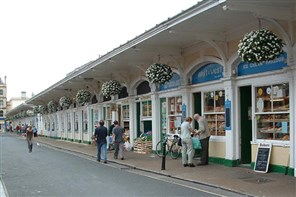 Barnstaple is the oldest borough in the country and is the commercial and agricultural centre of North Devon. A must visit for anyone seeking serious retail therapy.

Barnstaple is the oldest borough in the country and is the commercial and agricultural centre of North Devon. A must visit for anyone seeking serious retail therapy. Saxons first settled in Barnstaple (Barum) over 1000 years ago; in 930AD it was a Saxon stronghold serving as a market for the surrounding countryside.

Today it has a wonderful mixture of Victorian, Medieval and Georgian architecture and is proud to be a multiple winner of Britain in Bloom. Visit the Barnstaple Heritage Centre, sited in a fine Grade 1 listed building to learn more about the town's 1000 year history. For more information on Barnstaple visit the local Tourist Information Centre.

As the premier town in North Devon you’ll find great bars, great restaurants and big name high street shopping. But that’s not what makes Barnstaple special. Not alone. That’s done by the independent boutique shops within the town, the proud local food producers selling their delicious delicacies in the Pannier Market and, of course, the town’s colourful history. It’s this mix of new and old, of modern and traditional that’s behind Barnstaple’s charm. We’d love you to share it with us.

Bideford is an attractive town on the west bank of the River Torridge, where the river begins to widen to form the estuary. The old road has a lovely old bridge crossing the Torridge linking the town of Bideford to its neighbouring village East the Water. This impressive, arched stone bridge was built in 1535. The original bridge was built from timber in 1300, and was replaced by a stone bridge in the 15th century. Various adaptations have been made to the bridge throughout the intervening years.

Author Charles Kingsley lived here and based his novel Westward Ho! in this area of North Devon. The town of Westward Ho! takes its name from the novel – the only town in Britain known to have been named after a book rather than the other way round and also the only town in Britain with an exclaimation mark in it! Kingsley described Bideford as a town of white houses. Many of these are now pastel coloured but the town still has some pleasant narrow streets and attractive small shops.

In the 16th Century, Bideford was Britain’s third largest port. The name of the town is derived from by-the-ford, presumably from the days before the bridge was constructed. Today, Bideford is a thriving shopping centre with an historic Pannier Market holding both produce and crafts markets twice each week. Many antique shops are scattered amongst the narrow backstreets and alleyways that lead up from the quay and the river. These alleys are known locally as drangs.