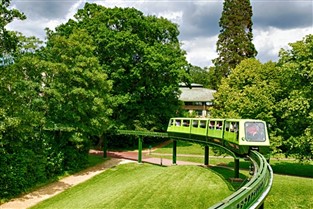 Beaulieu is an award winning attraction set in the heart of the New Forest National Park.

Beaulieu is an award winning attraction set in the heart of the New Forest National Park.

One great value ticket grants access to all the Beaulieu attractions.

Beaulieu is an award winning day out with something for everyone. Where will you visit first?

PALACE HOUSE - Get a fascinating look into the Montagu family home. Costumed guides give you a flavour of what it would've been like in Victorian times.

GROUNDS & GARDENS - Lose yourself in Beaulieu’s serene grounds and gardens, from the wild nature of the Millpond Walk to the beautifully designed flower gardens and topiary.

WORLD OF TOP GEAR - See iconic cars from memorable TV challenges in the condition they were left in! Plus step into the Enormodrome to get a feel for the BBC Top Gear studio.

BEAULIEU ABBEY - Walk in the footsteps of medieval monks who lived here over 800 years ago. The conserved ruins of this once vast medieval abbey include an exhibition on its history.

ON SCREEN CARS - The car’s the star in this ever changing exhibition of TV and Film favourites!

Current exhibits include: Mr Bean’s Mini, Del Boy’s Reliant Van, The Jaguar XKR from the Bond film Die Another Day, The `flying` Ford Anglia from Harry Potter and the Chamber of Secrets, Doctor Who’s much-loved car Bessie and Barbara’s pink taxi from The League of Gentlemen.

MONORAIL & VETERAN BUS - Save your feet and enjoy unlimited rides on the open top Veteran bus and high level 'Skytrain'.

With over 280 vehicles the National Motor Museum tells the story of motoring on our roads and racetracks. Re-live memorable challenges in World of Top Gear – and see exclusive behind-the scenes footage featuring the stars of the show. Experience the Victorian splendour of Palace House as costumed guides give you a flavour of life `below stairs`. Stroll through the grounds & gardens and explore the tranquil ruins of Beaulieu Abbey, which houses an exhibition on the monks that once lived and worked here. Ride the Monorail for sweeping views of the park, and uncover the covert role played by Beaulieu during World War Two in the Secret Army Exhibition…. And much more besides, a great family day out!