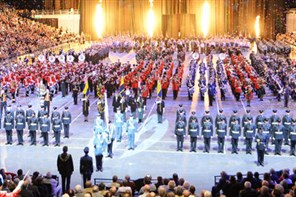 At the Resorts World Arena, Birmingham

As an event that features the Army, Royal Navy and Royal Air Force each year, the sad news of the death of The Queen hit all of those involved with the Tattoo particularly hard, as each year the 1,200 musicians and other participants perform in her honour and were due to celebrate her 70 years of service at the Resorts World Arena last weekend.

The decision to postpone was made both as a mark of respect for Her Majesty The Queen and the Royal Family, plus was based on the advice from the Ministry of Defence that the military forces that take part in the Tattoo would be unavailable for any military events that were not connected to the period of mourning, proclamations and the funeral.

It has now been decided that the Birmingham International Tattoo will therefore go ahead on Saturday 11th February 2023 at 6pm and Sunday 12th February 2023 at 2pm with a special performance that brings together all the usual elements of the Tattoo but also featuring a special tribute celebrating the life of Her Majesty The Queen and her 70 years of service to the Nation and also marking the accession of King Charles III to the throne.

With over 1,000 performers – including international marching bands, massed pipes and drums, field gun racing, dog displays, the parade of massed standard bearers plus much more – the Birmingham International Tattoo is Britain’s biggest indoor event of its type. With three hours of entertainment, the Tattoo features something for all the family.

So, if you are looking for a spectacular day out, come and experience the pomp and pageantry of the Birmingham International Tattoo which in 2023 will be at the Resorts WOrld Arena, Birmingham..

Bringing together marching bands and exciting displays, world class performers will join local groups to create a three-hour spectacle for all the family, that culminates in a Grand Finale featuring all the performers.

Come and experience the pomp and pageantry that is the Birmingham International Tattoo.