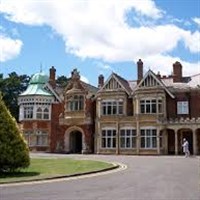 Home of the enigma Code Breaker from WWII and Churchill Memorobilia. Check out the tales of spies and strategic deception.

Home of the enigma Code Breaker from WWII and Churchill Memorobilia. Seeing one of the Enigma Machines, including the rare 'Abwehr G312', is undoubtedly a highlight of a busy day out at Bletchley Park, but there is much more than machines in a visit to the historic site. Check out the tales of spies and strategic deception. Have a look through the ornate Victorian Mansion that was headquarters to intelligence staff during the War.

Bletchley Park is a place of exceptional historical importance. It remains highly relevant to our lives today and for the future. It is the home of British codebreaking and a birthplace of modern information technology. It played a major role in World War Two, producing secret intelligence which had a direct and profound influence on the outcome of the conflict.

Over the past twenty years Bletchley Park has become an internationally renowned heritage attraction, visited by people from around the world, which acknowledges the successes from the War and the people responsible for them. It celebrates their values: broad-minded patriotism; commitment; discipline; technological excellence. By presenting and explaining these achievements and these values, in the very place where they occurred, Bletchley Park brings together the dramatic history of the twentieth century with the challenges we face in the twenty first in our rapidly changing and technologically complex society.

Visit the restored Codebreaking Huts 3 and 6, where Enigma messages sent by the German Army and Air Force were decrypted, translated and analysed for vital intelligence. In these iconic huts, the atmosphere is recreated with rooms dressed to resemble what they once were when Codebreakers worked there. Light-touch, interpretive exhibits allow visitors to experience how it was to work in wartime Bletchley Park. Plus “meet” some of the Codebreakers and listen to the men and women tell the stories of what happened inside them through the use of interactive exhibits, including sounds, projected images and authentic set dressing.

The Enigma machine was invented by a German engineer Arthur Scherbius shortly after WW1. The machine (of which a number of varying types were produced) resembled a typewriter. It had a lamp board above the keys with a lamp for each letter. The operator pressed the key for the plaintext letter of the message and the enciphered letter lit up on the lamp board. It was adopted by the German armed forces between 1926 and 1935. The machine contained a series of interchangeable rotors, which rotated every time a key was pressed to keep the cipher changing continuously. This was combined with a plug board on the front of the machine where pairs of letters were transposed; these two systems combined offered 103 sextillion possible settings to choose from, which the Germans believed made Enigma unbreakable.

The Poles had broken Enigma in as early as 1932, but in 1939 with the prospect of war, the Poles decided to inform the British of their successes. Dilly Knox, one of the former British World War One Codebreakers, was convinced he could break the system and set up an Enigma Research Section, comprising himself and Tony Kendrick, later joined by Peter Twinn, Alan Turing and Gordon Welchman. They worked in the stable yard at Bletchley Park and that is where the first wartime Enigma messages were broken in January 1940. Enigma traffic continued to be broken routinely at Bletchley Park for the remainder of the war.

Wander by the lake, relax and observe the wildlife. Children can let off steam on our new playground.

Children under 12 - pay coach only