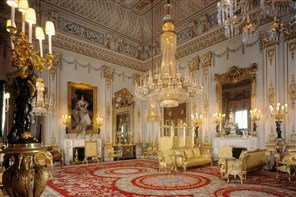 Buckingham Palace is recognised around the world as the home of The Queen, the focus of national and royal celebrations as well as the backdrop to the regular Changing the Guard ceremony. Explore the magnificent State Rooms which are open to visitors for 10 weeks each summer (22 July – 2 October 2022).

The State Rooms are the public rooms in the Palace where The Queen and members of the Royal Family receive and entertain their guests on State, ceremonial and official occasions. There are 19 State Rooms, which mainly reflect the taste of George IV, who commissioned the architect John Nash to transform Buckingham House into a grand palace in 1825. The State Rooms are furnished with many of the greatest treasures from the Royal Collection, including paintings by Van Dyck and Canaletto, sculpture by Canova, Sèvres porcelain, and some of the finest English and French furniture in the world.

Many of the State Rooms have particular uses today. The Throne Room is used by The Queen for court ceremonies and official entertaining, and was the setting for the wedding photos of The Duke and Duchess of Cambridge. The White Drawing Room, perhaps the grandest of all the State Rooms, serves as a royal reception room for The Queen and members of the Royal Family to gather before official occasions.

In celebration of The Queen's historic Platinum Jubilee in 2022, The State Rooms at Buckingham Palace will feature a display looking at The Queen's Accession to the throne in February 1952.

On display will be examples from the remarkable series of portraits taken by Dorothy Wilding, that formed the basis of The Queen's image on stamps and in British embassies across the world until 1971. Also featured will be The Girls of Great Britain and Ireland Tiara, which was a wedding gift to Princess Victoria Mary of Teck, later Queen Mary, on the occasion of her marriage to the future King George V in 1893. The diamond tiara was made by E. Wolff & Co for R & S. Garrard in a scrolled and pierced foliate form. Queen Mary gave the tiara to her granddaughter, Princess Elizabeth, as a wedding present on the occasion of her marriage to Prince Philip on 20 November 1947

The State Rooms are fully accessible and they welcome visitors with different access requirements. If you require Special Access tickets they must be pre-booked by Bakers Dolphin at the time of your booking. Wheelchair access and step-free access are available via a separate entrance at the front of the Palace.