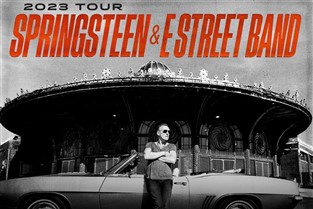 Bruce Springsteen and The E Street Band will mark their return to the UK next May and June 2023. Return coach only service ideal for those with tickets to see Bruce in concert at Villa Park Birmingham.

Return Coach travel only service ideal for those with tickets to see Bruce Springsteen in concert at Villa Park, Birmingham.

Bruce Springsteen and The E Street Band have announced four UK dates on their 2023 International Tour, which kicks off in the United States on February 1 in Tampa, Florida. After an April 14 homecoming in Newark, New Jersey, the tour heads to Europe from April 28th in Barcelona, Spain through July 25th in Monza, Italy. The newly announced dates mark Springsteen and The E Street Band’s first UK shows since June 5th, 2016 at Wembley Stadium.

Bruce Springsteen and The E Street Band will mark their return to the UK next May 2023 with a string of stadium shows across the country.

Bruce Springsteen has released 20 studio albums in his career spanning over six decades and has become one of the world's best-selling music artists. He’s been awarded 20 Grammys, two Golden Globes, an Academy Award, and a Special Tony Award, in addition to being inducted into the Songwriters Hall of Fame and the Rock and Roll Hall of Fame. His live tours have consistently been placed amongst the highest grossing of each of the last five decades.

Bruce Springsteen and The E Street Band’s last tour, ‘The River Tour’, was 2016’s highest-grossing tour worldwide. In May 2021, he became the eighth recipient of the Woody Guthrie Prize, a prize that honours an artist who speaks out for social justice and carries on the spirit of the folk singer.