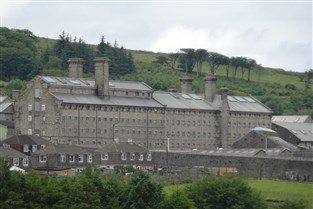 Take a scenic tour of the tiny hamlets, bustling towns, or pretty villages of Dartmoor with a fish and chip lunch in Princetown.

Your driver will take you on a scenic tour of the tiny hamlets, bustling towns, or pretty villages of Dartmoor. Plus you'll get a fish and chip lunch at Duggies in Princetown.

And throughout the day there will time do some shopping.

The area is thriving, lived in and real! So you could include Chagford, Widecombe-in-the-Moor, Ivybridge, Tavistock, Ashburton, Princetown, Okehampton, Buckfastleigh, or Moretonhampstead.

Princetown is situated on the high moorland [1400 feet above sea level] in the centre of the Dartmoor National Park. Princetown owes its existence to the vision of one man - Thomas Tyrwhitt. He was Lord Warden of the Stannaries and Private Secretary to the Prince of Wales.

By the end of the 18th century Tyrwhitt had established Tor Royal Farm and a vision to tame and cultivate the open moor, founding a small settlement called Prince’s Town.

Although livestock farming has always been an important part of Dartmoor life, Tyrwhitt’s arable farming dream failed, due largely to the harsh environment. But he came up with other schemes to revitalise this moorland community, including the building of the prison in 1809 to house at first French, then American, prisoners of war. Today HM Prison Dartmoor is still in use with up to 600 prisoners.

Our flagship National Park Visitor Centre (entry is free) is located in what was the old Duchy Hotel – where Sir Arthur Conan Doyle stayed and started writing his famous Sherlock Holmes story The Hound of the Baskervilles. Not far from the Visitor Centre car park is Princetown Railway line, which used to transport quarried granite to the coast. The railway line is now disused, but it makes an excellent recreational route for both walking and cycling. You may pick up the scent of hops as you wander along the track – this is coming from Princetown Brewery – the highest brewery in England.