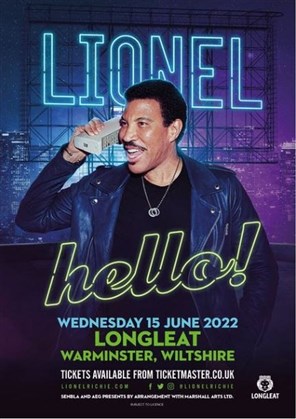 Grammy Award winning performer Lionel Richie will be performing at the Longleat Estate for a spectacular open air concert on 15th June 2022, as part of a brand new Hello Concert Tour.

Grammy Award winning performer Lionel Richie will be gracing our Estate for a spectacular open air concert on 15th June 2022, as part of a brand new concert series.

Presented by leading music promoters, Senbla, Live At Longleat will bring live music to our incredible grounds across multiple days in the summer of 2022.

Lionel Richie is the first artist announced as part of Live At Longleat. The show will form part of his 2022 UK tour.

Lionel Richie has four Grammys, a Golden Globe and an Oscar to his name, and has sold well over 100 million albums worldwide, with iconic hits such as ‘All Night Long’, ‘Dancing on the Ceiling’, and ‘Hello’. Sales of his latest album ‘Hello from Las Vegas’ put him at Number One in the Billboard Artist 100 chart in August 2019.

The singer-songwriter from Tuskegee, Alabama first found fame singing and writing songs with The Commodores including the all-time classics ‘Three Times A Lady’, ‘Stuck On You’, ‘Still’, and ‘Easy’. After turning solo, he became one of the most successful artists in the world, earning a string of 13 top ten hits between 1981 and 1987, including nine number one singles such as ‘Endless Love’, ‘Truly’, and ‘Say You (Say Me)’.

On performing at Longleat, Lionel said:

“I am really excited to be playing at Longleat. I know we’ll all have such an incredible night of partying together. It's a venue steeped in music history - The Rolling Stones and Elton John have both headlined Longleat and I'm honoured to be joining the esteemed list! See you all next year!”

Longleat has a rich history of hosting live music events, from the 60s advent of pop with the likes of Billy J Kramer and The Rolling Stones who performed to 16,000 people, through to more recent times with Elton John performing in 2016.

Ceawlin, Lord Bath, Executive Chairman of Longleat Enterprises added: “We are delighted to provide the backdrop to this series of new music evenings on the Longleat Estate. We know how special outdoor music events can be, and with the Estate's stunning landscaped grounds, alongside a world class line-up of music acts, we’re excited with what 2022 has set in store.”