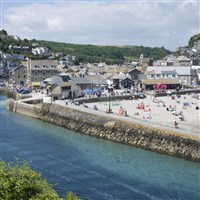 Visit Looe with its bustliing harbour where the fishing boats land their catch or visit Polperro with its enchanting jumble of cottages and traffic free streets.

Is in fact two towns, East Looe and West Looe. The Olde Twin Towns of Looe, East Looe & West Looe, connected by the seven arch bridge where the East and West Looe Rivers meet, flowing through the town & harbour where the fishing boats land their catch, the river then goes out past the banjo pier to the sea leaving the sandy Looe beaches East & West.

A spectacular few miles along the coast from Looe, is a different kettle of fish. Sheltered from the ravages of time and tide in its cliff ravine, it's an enchanting jumble of cottages, each one unmistakably the work of a Cornish fisherman. Wending your way through the traffic-free streets to the small harbour, you're treading the paths where barrows of fish were once carted and, under cover of night, brandy casks and tobacco bales were carried into their hideouts. Make no mistake, this peaceful fishing cove, mellow Polperro, was once a thriving centre for the area's smuggling. Today, in cellars where furtive smugglers once dodged the customs men's muskets, you can see displays of local crafts and fishermen's smocks, or you can dine in style at one of Polperro's excellent restaurants