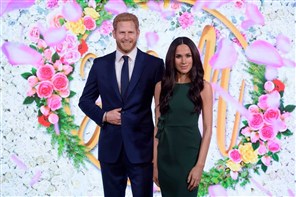 Meet Meghan Markle and Prince Harry! With 14 zones, over 300 wax figures, Spirit of London Ride and the amazing Star Wars plus Marvel Super Heroes 4D movie experience, glitz and glamour. Who do you want to meet?

As the world holds its breath ahead of the royal wedding, Madame Tussauds London today unveiled its most eagerly-awaited figure: Meghan Markle.

‘Her Royal Likeness’ and princely husband-to-be will feature in the attraction in front of a 15 foot wide video wall that will allow guests to choose how they would like to hang out with the much-loved couple. Guests can select from a range of backdrops and props to capture a moment with the young Royals – from the cutting of the cake at their wedding to relaxing on a private beach.

Be immersed at Madame Tussauds London, experiencing Hollywood, Bollywood, the Royal Family and Rock Royalty to name but a few. Walk the catwalk with Cara Delevingne at an exclusive fashion show, take the stage with Adele or have a photo with The Queen. Explore 400 years of London’s history on a nostalgic taxi ride before joining the crime fighting team in a Marvel Super Heroes 4D movie. Use the force to be transported to a galaxy far, far away and get in on the action with the greats of the Star Wars universe.

With 14 zones, over 300 wax figures, Spirit of London Ride and the amazing Star Wars plus Marvel Super Heroes 4D movie experience, we combine glitz and glamour with incredible history. So, who do you want to meet?

Disclaimer: Access to Sherlock Holmes Experience (an adventure within the mysterious world of Sherlock Holmes, fusing illusion, theatre and spectacle) and Alien Escape is not included in Madame Tussauds ticket price. Please enquire on site if you would like to upgrade to our theatrical experience (subject to availability at time of visit).

Experience the glittering world of fame for a day at Madame Tussauds. Fans can step into the Jakku desert and get up close to an exact replica of BB-8, the loyal spherical white and orange droid who stars in Star Wars: The Force Awakens. Listen to BB-8’s unique dialect and watch him light up exactly like its film counterpart! Experience the sights, smells, sounds, and suspense as you go 'backstage' at an international fashion event, brought to life through an interactive set featuring figures of two of the fashion world's most famous faces - Cara Delevingne and Kendall Jenner. We’ve declared a Kylie Christmas as the world famous singer’s wax figure takes centre stage in a special seasonal set. To celebrate the festive season, the legendary pop sensation today paid a visit to meet her wax figure for the very first time.

Star Wars at Madame Tussauds is a unique, immersive experience created in close collaboration with Disney and Lucasfilm, starring extraordinarily life-like wax figures of the favourite heroes and villains of Star Wars Episodes I-VI. Explore a galaxy of locations, including the swamps of Dagobah, Jabba's Throne Room and the flight deck of the Millennium Falcon.

Spreading across three floors of our famous domed auditorium, Marvel Super Heroes 4D brings to life some of the world’s best loved Super Heroes through a mix of 4D animation, interactive themed areas and startlingly realistic wax figures. A range of Super Hero interactives from turning invisible with The Invisible Woman (as portrayed Jessica Alba), going green with our biggest figure ever, the gargantuan 4.5m Hulk and trying out Wolverine’s deadly adamantium claws alongside the mutant hero (as portrayed by Hugh Jackman). The other wax figures featured are Spider Man, featured in a cleverly inverted office where guests can literally “hang out” on the ceiling, Head of S.H.I.E.L.D (Supreme Headquarters International Espionage Law-enforcement Division), Nick Fury (as portrayed by Samuel L Jackson), and Ironman*.