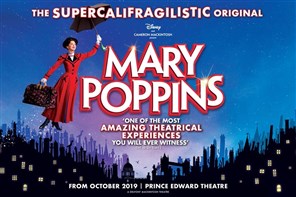 With a whole host of songs you’ll recognise from the film including Supercalifragilisticexpialidocious and Feed the Birds” everyone’s sure to have a jolly time at this revival.

Set to dazzle audiences with the superb entrance of the most famous nanny, step in time to Mary Poppins  at the Prince Edward Theatre, playing from October 2019. With a whole host of songs you’ll recognise from the film including “Supercalifragilisticexpialidocious” and “Feed the Birds”, everyone’s sure to have a jolly time at this revival, bringing the story of Mary Poppins back to the West End for the first time since 2008.

Since P.L. Travers’ 1934 book, everyone’s wished they could have been looked after by the nanny with a magical touch. What with Julie Andrews’ stellar performance in the 1964 film and Emily Blunt’s portrayal of the title character in Mary Poppins Returns, there’s never been a better time to open your umbrella and get ready to visit Cherry Tree Lane. So, if you want to see a classic childhood film brought to the stage in the original West End theatre it played, you’ll want to see Mary Poppins.

As you enter the show, you’ll be sent back over 100 years in time. Stopping off at Cherry Tree Lane, you’ll meet the parents of Jane and Michael Banks as they search for a new nanny. Not satisfied with who their parents decide, the children take it into their own hands and search themselves, with the search coming to a halt as they are greeted by Mary Poppins.

The stage production of MARY POPPINS is brilliantly adapted from the wonderful stories by PL Travers and the original film. It is co-created by Cameron Mackintosh and has a book by Oscar-winning screenwriter and Downton Abbey creator, Julian Fellowes. With a timeless score by Richard M Sherman and Robert B Sherman including the classic songs; Jolly Holiday, Step in Time, Supercalifragilisticexpialidocious and  Feed the Birds with new songs and additional music and lyrics, including Practically Perfect, by the Olivier award-winning British team of George Stiles and Anthony Drewe

Zizi Strallen will star as Mary Poppins, reprising her role from the 2015 UK tour of the production. Charlie Stemp will play opposite her as Bert, recently starring in Hello Dolly!, Half a Sixpence and a touring production of Rough Crossing  with John Partridge. All of the creative team for the British production are British, apart from the Sherman Brothers’ as the songs from the film feature in the musical. The original West End production was nominated for 9 Olivier Awards, eventually winning the awards for best theatre choreography and best actress in a musical.

We drop directly to the Theatre and pickup at roughly the same point after the show is finished.