Salisbury for the day 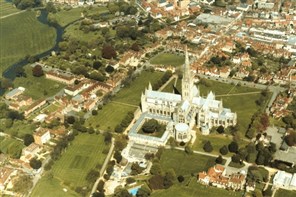 With its many tourists that throng the streets in summer, the city retains a relaxed atmosphere. And the cathedral spire still rises over the water meadows that have changed surprisingly little since Constable painted the scene centuries ago.

Salisbury Cathedral is unique in Britain as it was built nearly to completion within a single generation. As a result, it presents a unity of vision that is remarkable. Begun in 1220, and finished, with the exception of the tower and spire, in 1258.

That spire! At 404 feet, it is the tallest spire in England with foundations only 5 to 6 feet deep in the wet ground taking the strain of 6400 tonnes. Constable painted it, and generations of artists with paintbrush or camera have attempted to capture its beauty rising above the water meadows of the River Avon. Because of the wet ground, in 1668 Sir Christopher Wren was called on to survey the spire and it was found to be leaning nearly 30 inches out of plumb. The iron tie-rods inserted to brace it saved the day.

They say that there are as many pillars as there are hours in the year, and as many windows as there are days. Many of those pillars are made from beautiful, dark Purbeck Marble, which is in fact crystalline limestone that came from Corfe Castle, Dorset. The cathedral library houses an original copy of the Magna Carta, brought here by the William Longpre, Earl of Salisbury and half-brother to King John. Longpre is buried in the cathedral, the first person so honoured.

In the nave you can see what is probably the oldest working mechanical clock in the world, dating to 1386. There are no hands and no clock face, rather, it rings a chime of bells every hour. It was originally built to call the bishops to services.

A wide green space, The Close, surrounds the Cathedral. Essentially a walled city within the city, is ringed by wonderful period houses. The most memorable houses in the Close are Mompesson House, a National Trust property finished in high Georgian style, and Malmesbury House, originally built in 1327, but later remodelled in Georgian fashion also. Then there is Arundells, built in the 14th century but more lately the home of Sir Edward Heath.

Beyond the Close, there are numerous beautiful half-timbered buildings, floors tilting like a ship in heavy seas. The church of St. Thomas a Becket, a former "chapel of ease" for the cathedral, has a magnificent carved and panelled roof, and an organ donated by George III. The Market Place has seen regular markets since 1227, and it used to be sprinkled with crosses which were centres for selling particular kinds of produce. Nowadays only the Poultry Cross remains. The Market Square was the scene of the execution of the Duke of Buckingham in 1483. The Duke, in hiding from Richard III, was betrayed when a labourer noticed extra food being delivered to his hiding place. St. Ann Street is home to beautiful, ivy-covered Georgian and Victorian houses, and the 14th century St. Ann's Gate offers the most scenic approach to the Cathedral Close. George Frederick Handel gave his first performance in England in a room above the Gate.

Salisbury with its many tourists that throng the streets in summer, retains a relaxed atmosphere. And the spire still rises over the water meadows that have changed surprisingly little since Constable painted the scene centuries ago.

Visit the shops and the Cathedral that has been accepting visitors for over 800 years. Superbly situated in southern England's rural heartland, few destinations can match the amazing diversity. Salisbury has plenty of characterful places to see - some dating back to the 13th century - and a wide range of pubs, restaurants and tea rooms. A choice of arts and culture venues complement individual shops and regular street markets, and outside the city you will find charming country towns and villages.