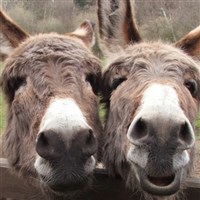 Donkeys of all ages are resident at Slade Farm and you can see how your donations are spent on caring for them all.

Enjoy a day at Sidmouth combined with a visit to the famous Donkey Sanctuary.

On the east Devon coast in south west England about 15 miles south east of Exeter. It is surrounded by beautiful countryside and is on the Jurassic Coast world heritage site and the South West coast path, a long distance footpath that skirts almost all of the coast in the West Country of England. Sidmouth has many independent retailers, including a surprisingly big department store. There are several pubs, restaurants, coffee houses and tea rooms. The town also boasts an indoor swimming pool, a college, sports hall, cinema, and golf course. Of particular note is the museum. A very carefully selected accumulation of local memorabilia, artefacts, and geological samples provides a comprehensive and fascinating picture of the area's geology and history.

Once a relatively small fishing village and failed port, Sidmouth became a fashionable resort for the gentry in the early 19th century. The town's numerous fine Georgian and Regency villas and mansions are now mostly hotels, but have lost none of their charm in the conversion.

The Lockyer Observatory and Planetarium, completed in 1912, fell into disuse and ruin but was saved from demolitionand now operates as a science education project and is regularly open to the public.

At The Donkey Sanctuary, we strongly believe that supporters have the right to see how their donations are spent on caring for our large family of donkeys. Our main headquarters and intake centre at Slade House Farm is open to the public. Gently rolling countryside with walks around the fields where you can meet the donkeys, who adore the fuss and attention received from visitors. Donkeys of all ages are resident at Slade Farm.