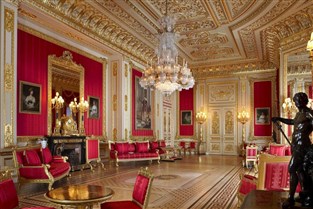 The largest and oldest occupied castle in the world, is one of the official residences of Her Majesty The Queen.

Today The Queen spends most of her time at the Castle.

To make the most of your time at Windsor, pick up one of the free multimedia guides at the start of your visit.

Windsor Castle is the oldest and largest occupied castle in the world. It is open to visitors throughout the year. Founded by William the Conqueror in the 11th century, it has since been the home of 39 monarchs.

Throughout its history, Windsor Castle has been redecorated, enlarged and rebuilt and today is also used regularly for ceremonial and State occasions.

Included in a tour of the State Apartments is Queen Mary's Dolls' House. Built between 1921 and 1924 for Queen Mary, consort of George V, by the leading British architect Sir Edwin Lutyens, it includes contributions from over 1,500 of the finest artists, craftsmen and manufacturers of the early twentieth century.

Photography and filming including the use of wearable devices are not permitted inside the State Apartments or St George's Chapel. In consideration of other visitors, mobile phones must be switched off. However, photography and filming for non-commercial purposes are encouraged in the outside areas of the Castle Precincts. #WindsorCastle