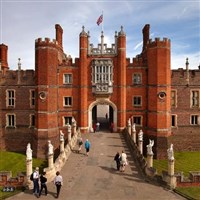 Over 800 years of history can be explored through this magnificent palace whose previous owners include Cardinal Wolsey, Henry VIII and Elizabeth I. Explore with your self-guided audio tour.

Hampton Court has grown from humble beginnings in the 11th century to one of the finest palaces in the world. Over 800 years of history can be explored through this magnificent palace whose previous owners include Cardinal Wolsey, Henry VIII and Elizabeth I.

Visitors are offered an introductory exhibition, a guide through Tudor kitchens, a costume guide tour, and the opportunity to see the Queen's state apartments, the King's apartments and the Wolsey and Georgian rooms. One of the most impressive sights is the Great Hall, Englands last and greatest medievel hall, decorated with sumptuous tapestries. Outside you can try not to get lost in the worlds most famous maze or visit the Privy garden restored to its 1702 glory.

The original Tudor Hampton Court Palace was begun by Cardinal Wolsey in the early 16th century, but it soon attracted the attention of Henry VIII, who brought all his six wives here. Surrounded by gorgeous gardens and famous features such as the Maze and the Great Vine, the palace has been the setting for many nationally important events.

When William III and Mary II (1689-1702) took the throne in 1689, they commissioned Sir Christopher Wren to build an elegant new baroque palace. Later, Georgian kings and princes occupied the splendid interiors. When the royals left in 1737, impoverished 'grace and favour' aristocrats moved in.

Queen Victoria opened the palace to the public in 1838. It has remained a magnet for millions of visitors, drawn to the grandeur, the ghosts and the fabulous art collection.

Hampton Court Palace’s world-famous gardens include 60 acres of spectacular formal gardens and 750 acres (304 hectares) of parkland, all set within a loop of the River Thames. The gardens are home to the world's oldest puzzle maze, a record-breaking grape vine, three National Plant Collections and a huge variety of wildlife, including the descendants of Henry VIII’s deer herd.

Summer sees the spectacular herbaceous border in the East Front Gardens at its best, while Queen Mary II's Exoticks come out in the Lower Orangery Garden. The Great Vine grapes are harvested at the end of the summer, followed by autumn colours in the Tiltyard, Wilderness and 20th Century Garden as deers rut in Home Park. In the winter, striking outlines of trees stretch across Home Park and, if we're lucky, snow highlights the topiary of the Privy Garden. The gardens come to life in spring with over one million flowering bulbs in the Wilderness and a riot of colour in the formal gardens.

Refreshments can be found in either the coffee shop, café or by taking your own picnic.

Please note that there is a walk of half a mile from the coach park to the entrance of Hampton Court.